The Finger Series was created for ARTMUC fair as a response to the Global Corona Pandemic.

The middle finger is a symbolic representation of FUCK YOU or FUCK OFF. It is a symbol that is charged with powerful energy and is recognized around the world as a statement belonging to a person who should not be joked with. It represents a certain type of power dynamic, aggression, and often seen as a call for non-confirmation.

The meaning of the Finger for RON MILLER

We have all seen and experienced the effects of the covid-19 on our lives, and they have not been pleasant: the impossibility of travel and the closing or cancellation of art exhibitions, fairs and shows; the subsequent loss of social and cultural life on the individual and community levels; the fall of the economy and the rise of anti-democratic governments and movements; as well as the rise of general feelings of uncertainty, desperation, frustration, anger, sadness and loneliness. The Finger is RON MILLER’s response to all that.

Aesthetic elements of the Finger Series

The Series are composed of 7 paintings and a sculptural installation. Four of them show single, two, or a couple of middle fingers floating in space with FUCK FAME written on them, while others make out the recognizable figure of the RON MILLER Geisha.

The sculpture is composed of a silver tray that hosts a plate of clay fingers, sprinkled with yellow paint, paired together with white scissors that were supposedly used to cut off the fingers from someone’s hand. A see-through glass container containing something white with COVID written on it is placed at the corner of the tray.

The Finger Series represent the typical RON MILLER art: ironic, playful, non-conformist, slightly controversial and reflecting on some aspect of our modern pop culture. The look of the paintings is cleaner than usual, with a lot of white space to be seen, yet the Geisha and FUCK FAME are present throughout. The main color used being RON MILLER’s favorite shade of almost florescent yellow, is present in different amounts, sprinkled over the finger sculpture instead of traditional red. 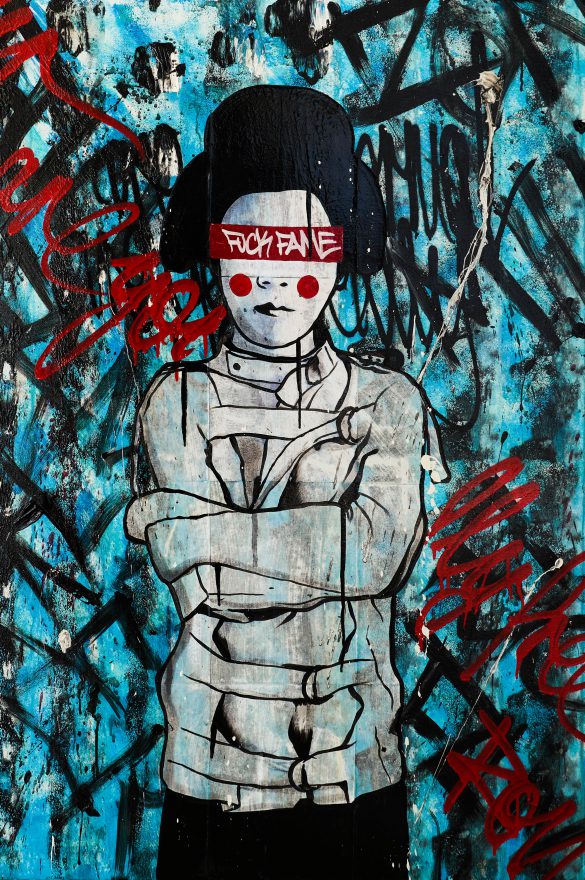